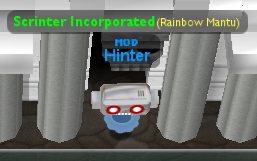 Hinter is a robot who has made it his goal to have the biggest amusement park in cubic castles! Hinter is known for his live event games, especially "Pick Da Color". The park has grown to 32 plus rooms, with the help of Hinter's carefully selected park staff! They have made the park what it is and Hinter thanks them tremendously! Hinter is also known for "HIRPS", which is a 12 minute roller coaster that goes through multiple player realms! Hinter is synonymous for his Robot Mask and Mantu. When not moderating Cubic Castles, the robot likes playing things like Strategy games and RPG's!