Difference between revisions of "Green Goop"

Green Goop is a Parkour & Damage Block in Liquid form. It is mainly used to make Traps, Obstacles & Parkour ways as well as restricting Slymes. It is also a Basic Buildable Block, used in Building & Decorating but generally not preferred in such usages due to ugly appearance. Green Goop is Craftable Block and not spawn in mines. It has an animated texture thats similar to Oil & Snot and its surface bubbles when a qbee sinks in it. It may also bubble from time to time. It is similar to Oil, Lava, Quicksand and Snot and it can give Damage to Qbees who sunk in it. Once you sunk within the block, you start getting damaged, so do not forget to jump when you're stepping on it! Unlike Oil, Lava and Quicksand, a Qbee that is damaged in Snot or Green Goop may directly move out of Liquid Block and not remain in Liquid. In Oil, Lava and Quicksand, as long as a Qbee don't make any move, Qbee remains in Liquid. Pets can also die once they go through the block. The block is also perfect for restricting Slymes in an area since Slymes can not pass Green Goop. They are also required to produce Slyme Splats but how one may produce it is a hidden secret -spoilers-.

Green Goop Blocks are Craftable Blocks and can also be bought from the Cubit Store via the Slyme Pack. If you are lucky you can also find them in Free Builds if someone built it there before you and it remained there for someone else's usage. If you want to craft it here is the recipe. You may also get them by trading with others. 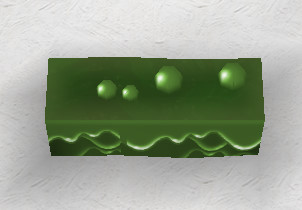